All those wires running through trenches and over open ground meant that British communication leaked badly. German “Fernsprech Truppen” (telephone troops) either tapped lines by attaching a cable of their own or used earth induction to detect signals passing through the ground. British plans and movements were frequently intercepted. (1)

In July 1916, for instance, at Ovillers, near Albert, British troops preparing to attack were “smothered under a bombardment which left us with no men to make it. A few days after when we took Ovillers, we found the piece of paper on which the man with the German  ‘listening set’ had put down, word for word, our orders for the first assault.” (2) 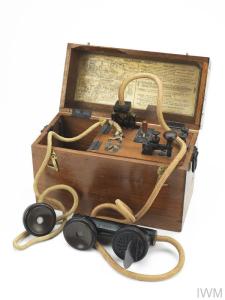 The disaster might have been averted had Captain A.C. Fuller’s eponymous invention been available at Ovillers. Invented in 1915, and brought into use the same year, the Fullerphone was a telegraph device which used existing telephone lines to convey messages which were virtually impossible to overhear.(3)  Understanding how the Fullerphone worked requires more than I can recall of my long-ago elementary physics classes, but the curious can find out more at a blog on electronic warfare, at the Imperial War Museum or, in several pages devoted to it by Louis Meulstee.

More and more Fullerphones were manufactured and

introduced to the Western Front. We are told by one source that J.R.R. Tolkien, who was a signals officer with the 11th Lancashire Fusiliers in Picardy, welcomed “the miraculous addition to his equipment” of his new Fullerphone in September 1916. Foul weather had been making visual signalling night impossible, but alas, the line was broken again and again by shellfire.(4)

The photograph of Tolkien, taken in 1916, comes from Wikimedia Commons.

One thought on “More communication: Fullerphone”